myurbanist correspondent Fiona Cox (@coxlaw on Twitter) reports from the United Arab Emirates with first-hand perspectives on an evolving cityscape:

City centers, thriving urban regions and cultural hubs were far from the Abu Dhabi of a century ago–the dominant features of the place were tents or huts in a desert. But six decades later, shortly after the United Arab Emirates declared itself a nation, there was an opportunity to emerge as a new place, and embrace the best of everything worldwide: culturally, architecturally, environmentally and aesthetically. 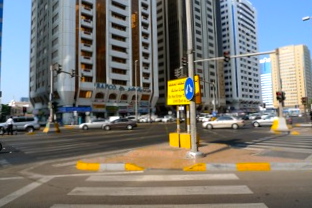 On close inspection, today’s Abu Dhabi reveals a melting pot, with most of the population consisting of expatriates and immigrant workers, and the majority of architecture reflecting a purposeful intent to be seen as an indisputable business center.

Each skyscraper has a function: the ground floor is made up of small businesses, such as restaurants, hardware stores, clothing shops and dry-cleaners. The ensuing floors are made up of either corporate businesses or residential living. Perhaps even more notably, mosques abound.

Ironically, the most striking element of the city is that buildings which one might consider “traditional” are absolutely exceptional. The Sheikh Zayed Mosque, for example, is unlike anything else. It is vast and beautiful. 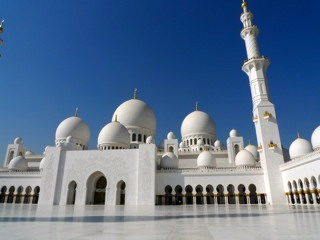 Although each element of the mosque was made elsewhere (marble from Brazil, glass from Italy, clocks from England, carpets made from New Zealand’s wool and crafted in Iran), each such part merges into something quite extraordinary.

As a whole, this mosque leaves the observer yearning for more examples of traditional architecture.

With the imminent building of new international renditions of the Guggenheim and the Louvre in Abu Dhabi, the questions of form and function remain.

Will the urban design of the city continue to parlay a functional business center? Or will Abu Dhabi realize its potential to become a place of truly comprehensive aesthetic value?

One thought on “evolving aesthetics of the desert: form and function in Abu Dhabi”