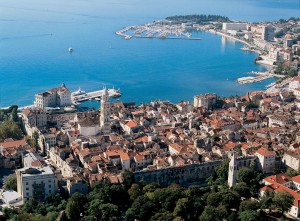 I don’t think we ask that question broadly enough, and our day-to-day, property-specific incrementalism can easily overshoot the greatest lessons from history for today’s city politics, regulation and economic constraints.

A hometown case in point, last month, transported me from Seattle to Croatia (virtually) for inspiration about why we should think beyond limited geographies, time frames and lifetimes when we discuss urban redevelopment options. 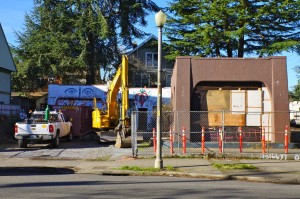 The purported upshot of the local story—that the building’s had a good life and the new use is commendable—is clear in Brodeur’s headline: “Sometimes it’s OK to let an old landmark go”.

How did our predecessors handle these issues in simpler times, when reuse was a practical necessity?  What can we learn from those stories?

As our surroundings evolve, can we create incentives and inspiration for transformational places that are sustainable in form, function and attention to the past?  I have touched on these questions before, when highlighting hill towns as placemaking icons and profiling Italy’s re-emerging Matera, the UNESCO World Heritage site also termed “the sustainable city of stone” (in The Atlantic last year).

When considering these questions about a transition from old to new, focused  more on a city than buildings, for me there is one place  that deserves a very hard look: Split, Croatia (another UNESCO World Heritage site).  Amid the old town center within and next to the ruins of the retirement palace of the Roman Emperor Diocletian, adaptive reuse is defined at first sight on an urban scale—a place which began as something different from it is today, yet lives on in the new clothing of another age—as more juxtaposition than reinvention.

I was lucky enough to first visit Split in 1968, in the old Yugoslavia, and to return many times in the years that followed. It’s not a stretch to say that its impressionable story explains my legal work in urban redevelopment. There, the survival and reuse of historic elements tells a valuable tale of sustainability, with lessons learned about human capacity to reuse and adapt the built environment.

Shortly after 300 A.D., on the site of Split’s town center, workers completed Diocletian’s Palace.  Diocletian was the first Roman Emperor to voluntarily abdicate, and retire in the modern sense; he viewed the palace as a purposeful respite from power in his home region, possibly for medical reasons.

After Diocletian’s death, the palace was first a refuge for exiled imperial family members.  Then, through serendipity, after destruction of the nearby Roman city of Salona by the Avars and Slavs at the beginning of the seventh century, the palace became a shelter for fleeing citizens, later a medieval town, a Renaissance regional center, and eventually a major city—surprisingly, with core elements of the palace still prominent today. 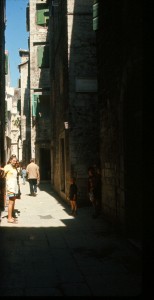 I slid through more right-angled alleys that deposited me into an hallucination: a sunken square hemmed in by antiquities. The delicate remains of a colonnade filigreed one side, and the skeletal façade of a temple, now buttressed by brick… Spotlights dramatized the age-blackened columns, giving the scene a crumbling magnificence, while the cafe tables spread across the peristyle provided a jarring contemporary note. So that welded onto the indoor/outdoor motif — niches and statuary under the stars — was the even more compelling one of ancient and modern: teenagers flirting on ruinous walls; couples drinking in the shadow of the gods. It was like stumbling upon a cocktail party in the Roman Forum.

How was this scene created?

In essence, the palace, which spanned almost 10 acres, contained enough elements of classical urbanity—including the gridded crossroads of a military camp (the ancient castrum and its standard roads, the decumanus and cardo), as well as several ceremonial spaces and religious structures—that when repopulated after the destruction of Salona, it became easily adaptable to what we now consider urban uses.

This unintentional convertibility shows an interesting evolution over time;  A mausoleum became a cathedral, the cardo became the winding medieval street that remains today,  the crossing of the decumanus and cardo at the peristyle (a classical courtyard below the Emperor’s apartments) became a baptistry, public square and historic urban center, and the Emperor’s apartments became the structural framework of a residential area.

Due to the interesting progression of the palace to city, Split has drawn visitors for hundreds of years. The Scottish architect Robert Adam profiled its unrivaled preservation of Roman architecture in 1764, through collected drawings, viewable here, often acknowledged as inspiration for the Georgian architectural tradition of parts of London, Bath and Bristol.

In the last century, many excavations and publications by local and American teams have admirably documented the palace’s history and transformation (including the often cited work of Jerko and Tomas Marasovic’, whom I had the honor of meeting as a teenager).  In a 1970 book, the Marasovic’ brothers advocated a universal message in the context of continuing investigation, discovery and restoration to “ensuring…renewed function within the context of a modern urban community”.

While Split guidebook references contain cursory summaries of the palace’s story, the confluence of past and present discussed here, is not often mentioned in the American dialogue, nor is it consistently cited as prospective learning for cities around the world.  This a missed opportunity.

I believe that visiting Diocletian’s Palace and reflecting on how the old can blend with the new provides incomparable perspective. This can add value to today’s discussion of familiar building restoration approaches, or even already innovative, largely replacement-style redevelopment of areas like a former military base, an airport (e.g. the former Stapleton Airport in Denver), or an institutional campus.  The scale of adaptation in Split confirms how humans can be at home and enriched by large-scale incorporation of the past.

A National Geographic Center for Sustainable Destinations summary of Split hints at the potential lessons:

There was little in the way of organized tourism around the ruins—–there was an outdoor café in the middle of them. However, I found this integration of the historic and the contemporary to be quite pleasing.

Split is one of those places best experienced firsthand, to fully realize the true experience of place—and witness how people live, work and entertain while integrating the history around them.  Short of an actual visit,  several of Peter Watts’ 360 degree photographs at the Panoramic Earth website approximate the experience,  here, one of which is embedded below.  Family life exists amid shops, restaurants and bars, with more recent wayfinding signs summarizing venues at the head of narrow streets.

Panorama of Peristyle of Diocletians Palace supplied by Panoramic Earth

But what really distinguishes the complex today is not its size or its symmetries but its fantastic utilitarianism. It is not just that people now gather where Praetorian Guards once strolled, but that they live here. In what must stand as one of the world’s, if not first, at least most spectacular instances of adaptive reuse, the citizens of Split blithely built their dwellings within the palace. They grafted their humble residences onto the walls and filled in the arcades with bedroom windows. Just as weeds sprout among ruins in other lands, here it’s houses. (It is almost as if, after the Cultural Revolution, the Chinese had erected apartment blocks in the Forbidden City.)  …I would stroll the grounds shaking my head in wonderment at the curtained front doors next to erstwhile temples, the soccer balls sailing past toppled pillars. I could not walk along the waterfront promenade without staring up in amazement at the stately columns embedded in the condo façade, and occasionally bookending sagging lines of wash.

In other cities, some historic urban cores survive, and there are many examples—from Istanbul to Venice to Jerusalem—even Dubrovnik to Split’s south.  Old towns, often within formerly defensive walls, become functional, large-scale artifacts, some evolved urban areas and some tourist meccas.  In contrast to Split, they were always, first and foremost, cities or towns.

Moving forward, we should design and regulate in a way that the inadvertence described here becomes more purposeful, enabling sustainable reuse on a broader scale.  Examples include zoning and building code provisions that anticipate land assembly and not property-by property approaches, that allow for convertible uses in buildings, that provide for a robust mixture of old and new materials, and the outright recognition that both public and private spaces can realize new uses over time, with only minor reconfiguration.  Lenders, often the true drivers of development, should understand the benefits of such reactivated places.

Indeed, some states and cities have policies encouraging the concept of adaptive reuse.  For instance, Los Angeles has a 12-year-old adaptive reuse ordinance, which encourages live-work revitalization in certain areas of the city.  It is under study for improvement and expansion.

While these examples show that not all buildings are alike, and best practices can make a better place, none tell the more holistic, inspirational story of how human settlements, as a whole, adapt to a changing environment.

Throughout history, cities have fulfilled central cultural, economic and religious roles as a both centers of settlement and qualitative measures of human habitat.  To reinvent them (or juxtapose the best of the past), we need to know where we have been and where we are going, at more than a building scale.

A similar version of this post first appeared in The Atlantic Cities and was recently republished on Crosscut.