Through the blogosphere, I’ve had the pleasure of trading observations about the role and function of shutters with David Mathias, a well-known author on woodworking topics who now lives in Switzerland. David was kind enough to republish the myurbanist article, “shutters, placemaking and urbanism” today on his great blog, Poems of Wood & Light.

In return, here’s David’s August 18 take on shutters, “Shutters and Flying Monkeys”, indented below. David’s thoughts have currency here, as he continues to ponder evolution from the American suburb of his youth and researches the colorful role, history and function of shutters in Switzerland! Photo credits, of course, to David Mathias at Poems of Wood & Light.

I spent my childhood, as did many of you, in suburban tract houses. Built in the 1960s, these were typical American homes of the time. Well-built, unpretentious symbols of the American Dream. The second of these houses, which my parents purchased when I was 15, is a wonderful split level with 3 bedrooms, two-and-a-half baths, and a two-car garage. There is no marble in the bathrooms nor granite in the kitchen. The stairs are not 48″ wide. It was a simple, warm and inviting home for our family. My parents lived there for 29 years before heading south for warmer weather some years after retiring. 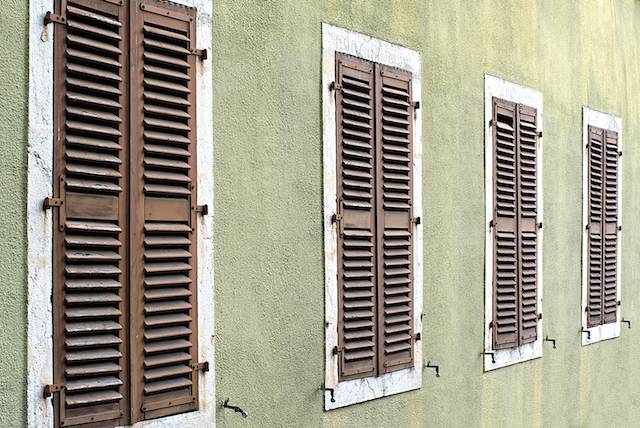 The two houses in which I spent nearly my entire childhood share a feature that caused me some confusion as a child. I believe that the first time I saw shutters that actually closed was in The Wizard of Oz (not one of my favorite movies — to this day, I hate those damn flying monkeys). The house we lived in from the time I was six had shutters. They were black and rigidly attached to the house. No hinges, no latches, no attempt at functionality. Until I saw The Wizard of Oz (I hate those monkeys), I thought nothing of it, I had no idea that there was a function for them.

As I lay there in my childhood bed, too afraid of airborne primates to sleep, at least I had something to ponder: Why did our house have immovable shutters? What was the point? Shutters, I had learned, were supposed to be closed during severe weather and subsequently smack young girls in the head allowing for development of acid-induced flights of writerly fancy and shows of Technicolor glory. Our shutters did none of those things.

I was too young to understand that modern storm windows had rendered shutters largely unnecessary. Of course, they couldn’t simply disappear. People were accustomed to seeing them; functional or not, they were essential. At some point in time, I figured that out and I assumed that functional exterior shutters were throwbacks to another time, present only on old houses (houses potentially filled with flying monkeys).

By the time my wife and I bought our first house there was no pretense of purely decorative shutters. Nor were there storm windows which had been supplanted by sealed, multi-pane units, but that’s a different topic. Shutters were officially dead. Mystery solved. Nothing to see here. Move along. 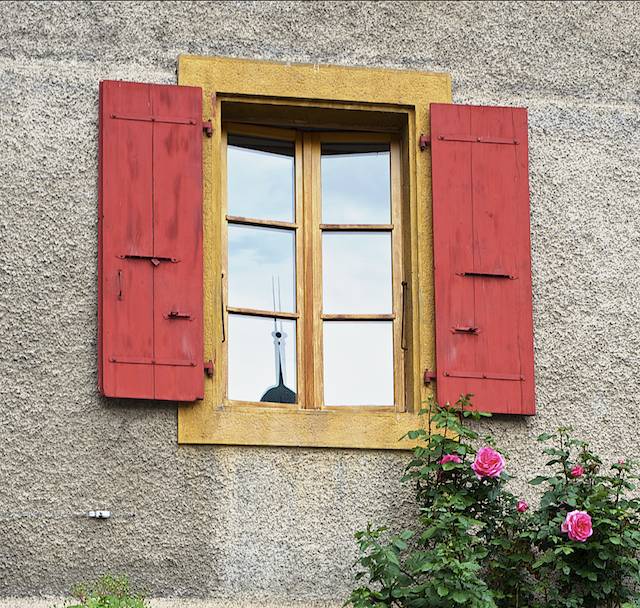 Then we moved to Switzerland. In this country, shutters are everywhere. They are on old buildings. They are on new buildings. I’m not sure that I’ve seen a building here without shutters. And they are all functional. Every last one of them. Hinges. Latches. The works. Which suggests a question: Who cares? I do and here’s why. They are fantastic. Perhaps the appeal is related to the childhood confusion or maybe it is purely aesthetic. Either way, I can’t get enough of them.

Buildings here tend to be more colorful than what I’m used to in the US. Shutters provide one source for colorful displays. In some cases, patterns, sometimes similar to sunbursts, are painted on. These appear to correspond with region though I still have much to learn about that tradition. Shutters can also convey a great deal of character. I have a particular affinity for the old, weather-beaten examples, colors faded by the sun and years of service. I find a certain dignity in them and am reminded that in some parts of the world, old things are not discarded simply because of their age. 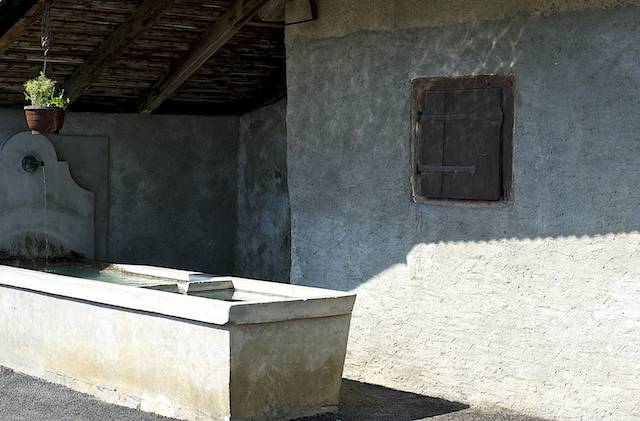 Even old shutters are not mere artifacts. More than simply functional, they are both useful and used. With the exception of large public buildings, nothing in Switzerland is air conditioned. With air conditioning largely unnecessary due to the mild climate, we have rediscovered fresh air. At night, we often sleep with windows open. During the day, one can open windows to let in fresh air and close the shutters, at least partially, to keep out the sun. And flying monkeys. Those things are just creepy.