Next week, myurbanist will be reporting live from France, further exploring tenets of urbanism which continue to evolve at home and abroad. Here is a case in point from earlier this year, when our new year’s retrospective included observations which first appeared in seattlepi.com on June 7, 2009, with photos added of the Frejus, France twice-weekly market. 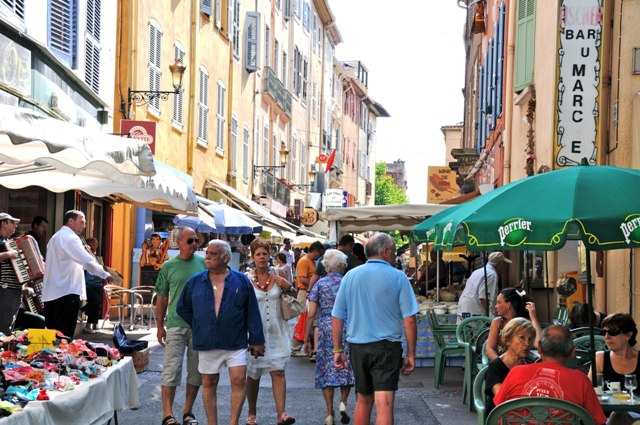 As noted on May 25, when discussing the role of streets and managing the impact of the automobile: “This has all happened before. And it will happen again.” It did not take long to prove the point.

A current visit to France shows that even in a society that prioritizes the pedestrian, especially on market day, the eternal dance of human and machine remains. Yesterday in Frejus on the Cote d’Azur, while sipping coffee watching a street closed off to pedestrians in time-honored market routine, friends told me how the previous market day had featured an altercation of sorts, just adjacent to our vantage point. 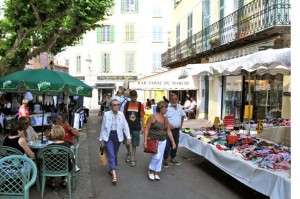 Despite the presumptive nature of the weekly market preempting cars, and mechanical pylons closed in unison, an upscale Mercedes made its way down the closed cobblestone street flanked by vendors and musicians. When the driver reached the closed pylons, she realized she could go no further. For the next 40 minutes, while the driver panicked in frustration, passers by conferred and some let loose insults premised on pedestrianism and some took the side of the driver, seeking to help. After all, as the driver apparently exclaimed, she lives in the town center, whether closed for market day or not, and she had the right of passage.

Almost an hour from the altercation’s start, the police arrived, and lowered the pylons. The pedestrian market returned to its historical place, while, inadvertently, the automobile had won a round in the public/private balance of control of the street, and the rights of adjoining property owners.

The moral: The new forms of growth, land use and transportation currently on center stage in our region have and will be played out across the world for generations. They cannot simply be imposed without a careful understanding of the rights at issue.

As Frejus reminds us, even where traditions rule, the battles remain.

6 thoughts on “walkability and placemaking on market day”