A footnote to the new series, in the urban world, juxtapositions matter 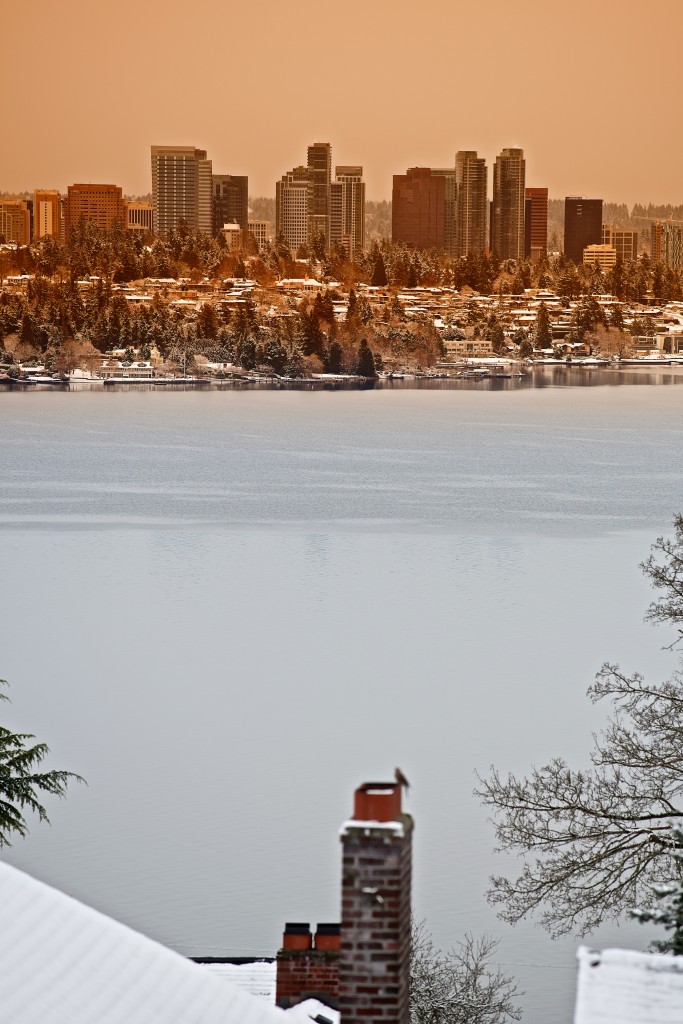 Today, with snow on the ground in our region, some tongue-in-cheek Facebook threads with writer and friend Knute Berger, and later with Bellevue, Washington City Council Member John Stokes, alluded to the common bond and unifying effect of a snowfall.

In response to a Facebook version of the photograph above, in which I mocked an “envious” Seattle urbanist bird admiring Bellevue, Stokes wrote:

Nice little city we have over on this side of the lake, excellent photo. That bird is in a nice place too. Great region, unified today by Nature.

Much like my “placemaking” observations about the Seattle Seahawks’ Super Bowl parade in last Friday’s The Atlantic Cities, this social media chatter focused me on another spontaneous event that bridged political and economic boundaries as a common experience: a uniform, visible cover on the land.

I returned to one of my favorite pieces of writing, and a 35-year fascination with the concluding paragraph of James Joyce’s 1914 short story, “The Dead“, included in Dubliners.

Yes, the newspapers were right: snow was general all over Ireland. It was falling on every part of the dark central plain, on the treeless hills, falling softly upon the Bog of Allen and, farther westward, softly falling into the dark mutinous Shannon waves. It was falling, too, upon every part of the lonely churchyard on the hill where Michael Furey lay buried. It lay thickly drifted on the crooked crosses and headstones, on the spears of the little gate, on the barren thorns. His soul swooned slowly as he heard the snow falling faintly through the universe and faintly falling, like the descent of their last end, upon all the living and the dead.

Of course. But for me, it is a déjà vu about the potential for common ground.

In college, I was even more ethereal on the same theme, in a short story about snowfall in Jerusalem. Emulating Joyce, I toyed with a seeming unity of snowfall in a divided city—something I have seen journalists imply a few occasions since.  (In particular, a New York Times reference barely two months ago cited joint Israeli-Palestinian efforts to assure safe passage of Israeli officials from Ramallah back to Jerusalem).

This déjà vu is a clarifying footnote to why I have embarked on a series about urban juxtapositions, overlaps and overlays.  Thanks to the snow, and the Seahawks’ parade, there now is a new gloss on the suburb/city-based ninth entry of a week ago.

I’m even more convinced that analysis and dialogue about cross-silo experiences can help avoid a divisive undercurrent to the ongoing refinement of urban best practices— beyond traditional monikers of city, suburb, region and neighborhood.

Image composed by the author in Seattle. Click on the image for more detail. © 2009-2014 myurbanist. All Rights Reserved. Do not copy.

For more information on the role of personal experience in understanding the changing city,see Urbanism Without Effort, an e-book from Island Press.