Seventh in the new series, in the urban world, juxtapositions matter

For many years, I have been on a self-imposed assignment to discover and capture the human, experiential elements of urban juxtapositions, overlaps, intersections, and all the other descriptors used in this series so far.

It’s an attempt that I have suggested to others, because it seems as helpful to the urban dialogue as the ever-evolving blogs and articles centered on best practices and sensations from afar. I believe that an enhanced quality of life and a sense of belonging and safety can result from the total of our observations about how cities work every day.

For me, it’s not about placemaking advocacy, championing certain development forms, or counting new clients in the door. Rather, and most importantly, it’s about inspiration and how, in turn, such inspiration relates to the more practical issues at play.

One sub-theme of this effort is artistic more than empirical, or as one critic noted more specifically, “more impressionist than analytical”. Each of the following visual impressions is consistent with that approach, but with a practical taint foreshadowed above.

Think of this seventh series entry as an illustrated reminder of many of our baseline urban experiences, and some of the underlying forces that drive governments and communities to consensus or opposition. 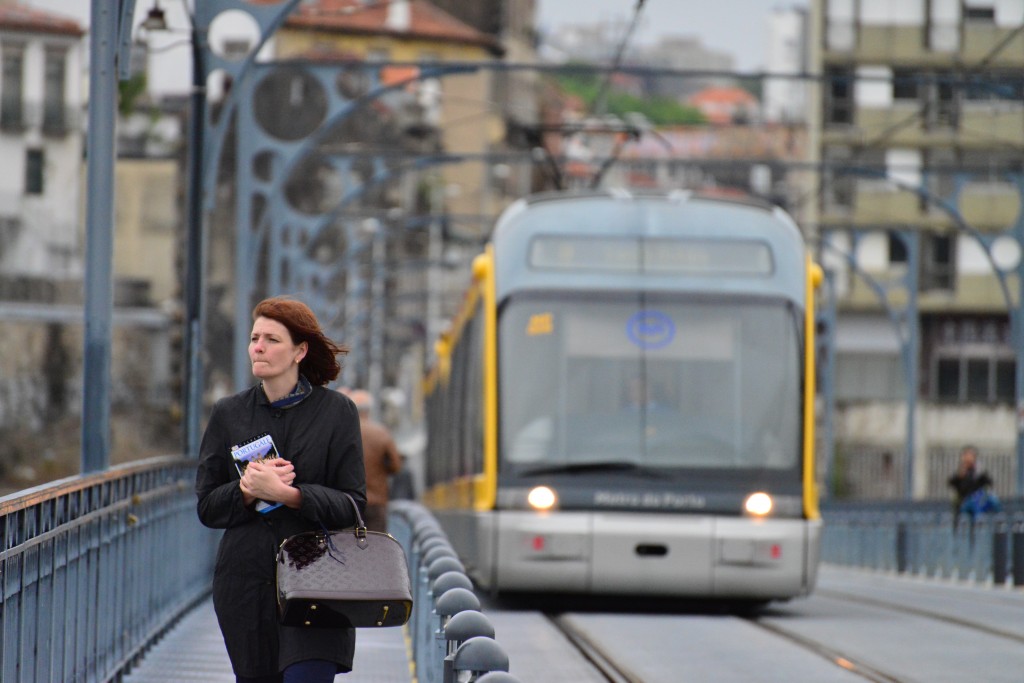 On a Portuguese railroad bridge adopted to pedestrian and transit use, an innovative “sidewalk” participant shares the mix and match of human and tram: All “streets” need not include all transportation modes. 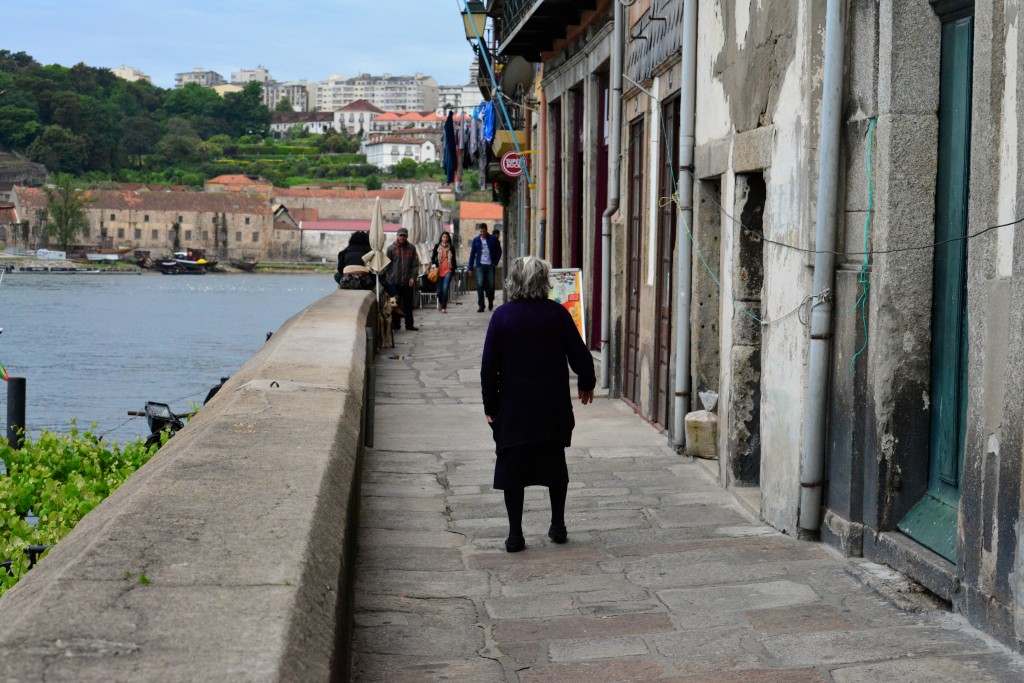 The backdrop of new development to a historic, scaled riverfront district shows the real change that is in the memory of the featured resident along the way. 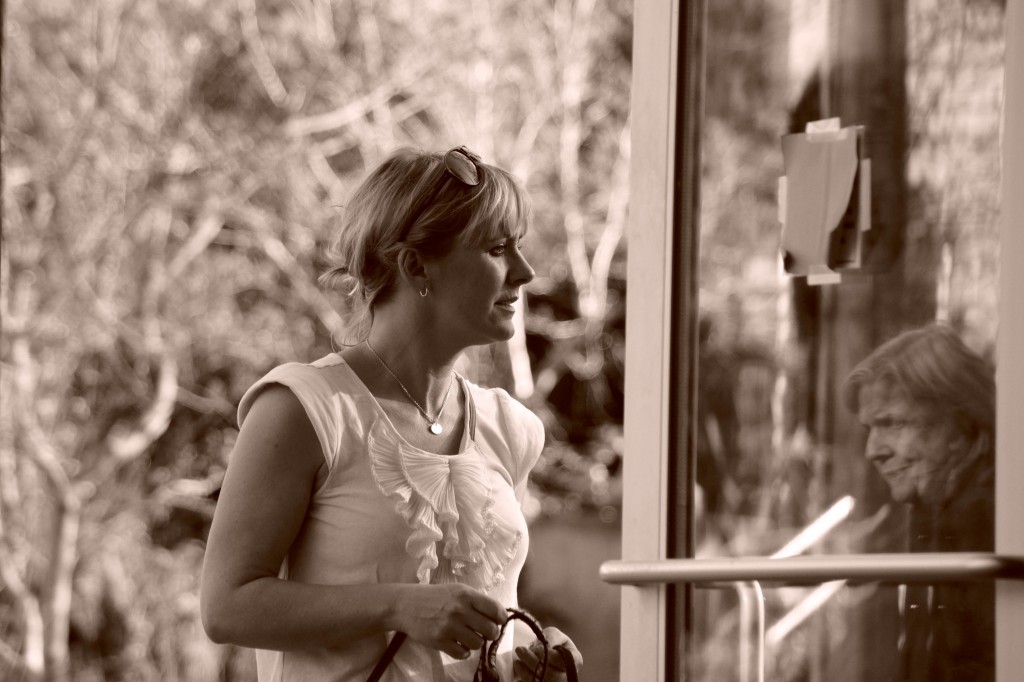 Similar to the preceding example, in the doorway of a neighborhood coffee shop, members of two different generations of city residents cross paths. Are the needs of both adequately accounted for from day-to-day? 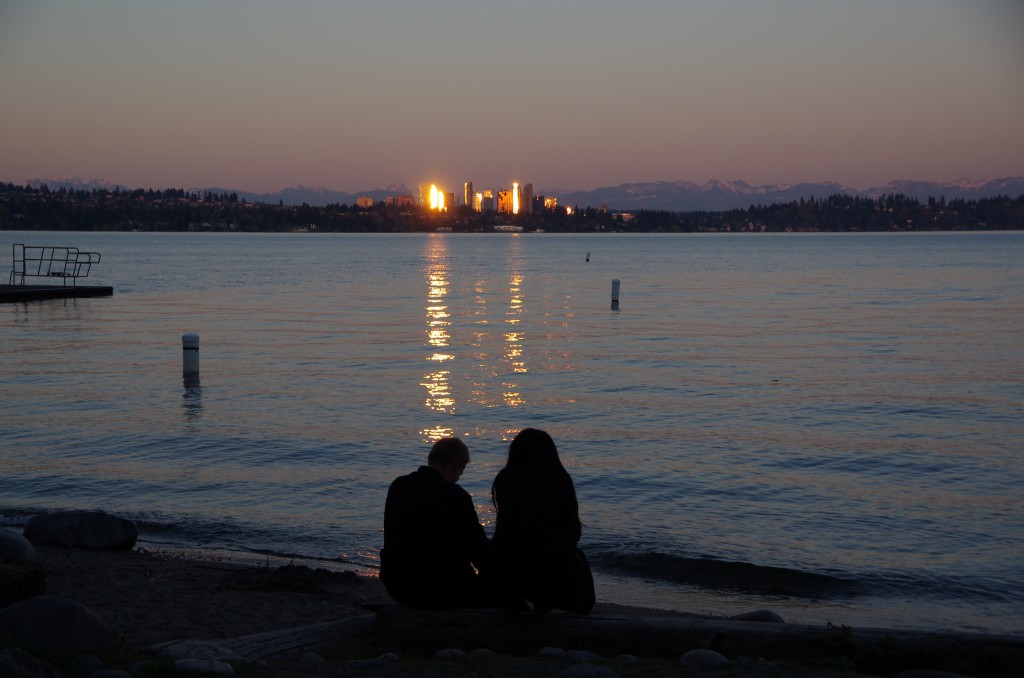 If water, light, buildings and people can align with this serendipity, are we missing something more magical in the way we discuss and manage urban places? 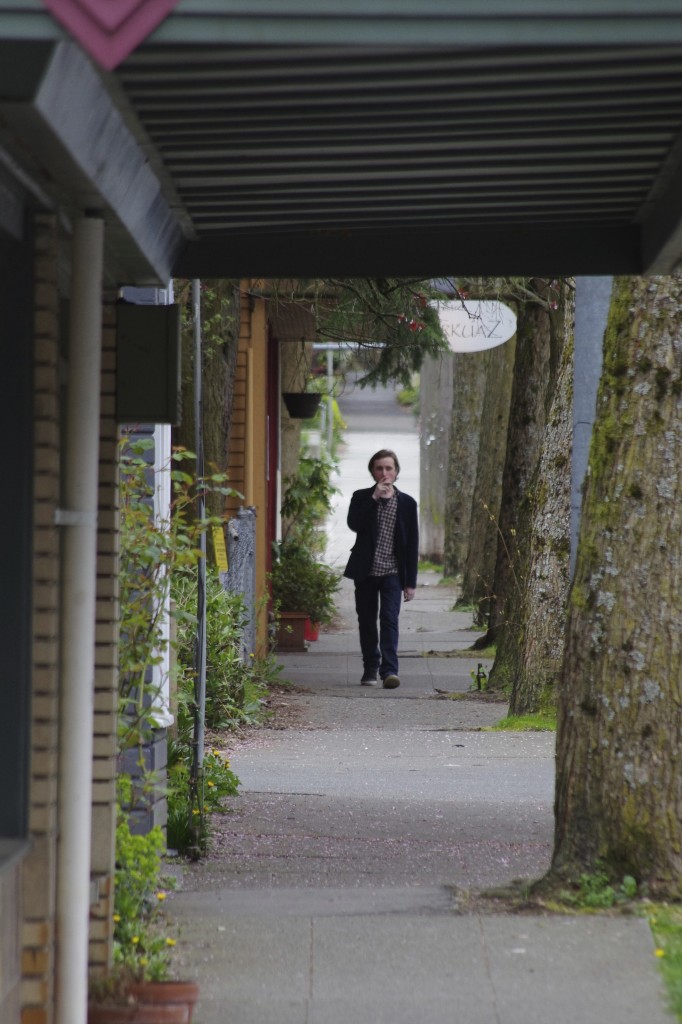 In the city, walking amid the trees can mean issues of sidewalk repair and maintenance of private property, encumbered by a public easement. The responsibilities vary among jurisdictions, and are not always clear. 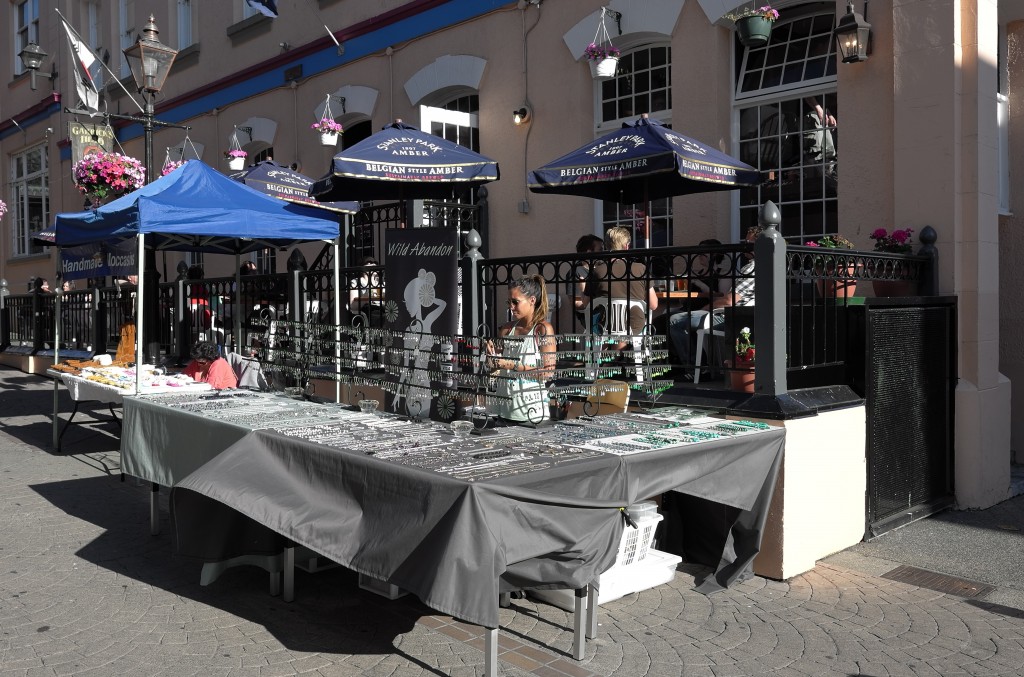 Street vending carries many of the issues of the sidewalk of the last example, but in this case layered and with temporary structure. What are the rules driven by country, city or community? 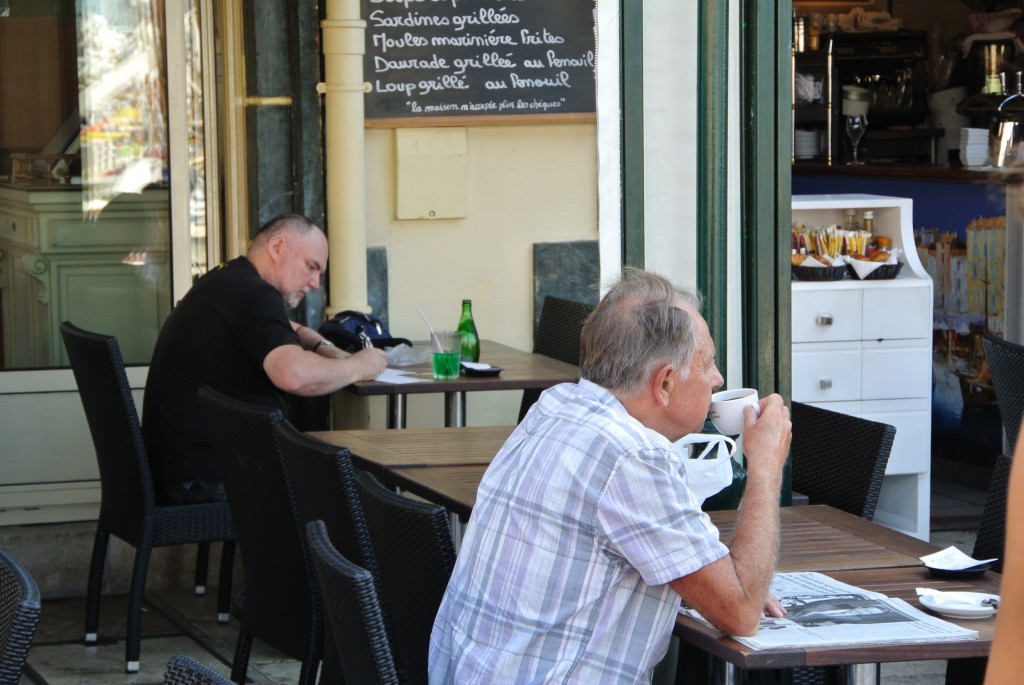 Again, public places are often private at the same time. How does work and commerce mix to “meter” the use of both? 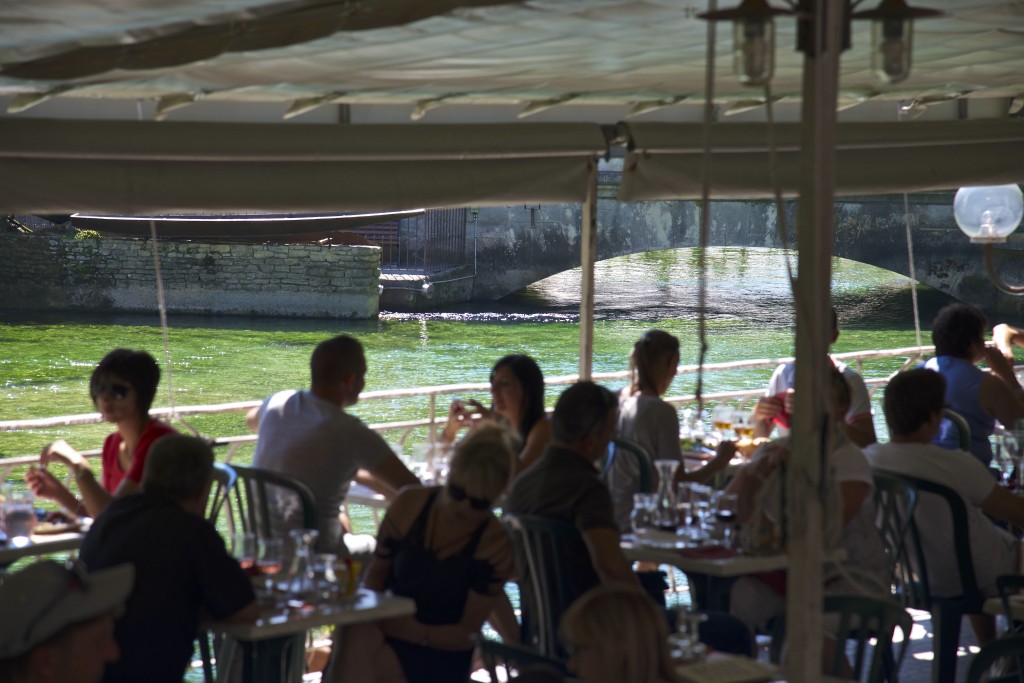 When is it environmentally sound to densify over water, consistent with human enjoyment and aesthetic traditions of a French spa town? 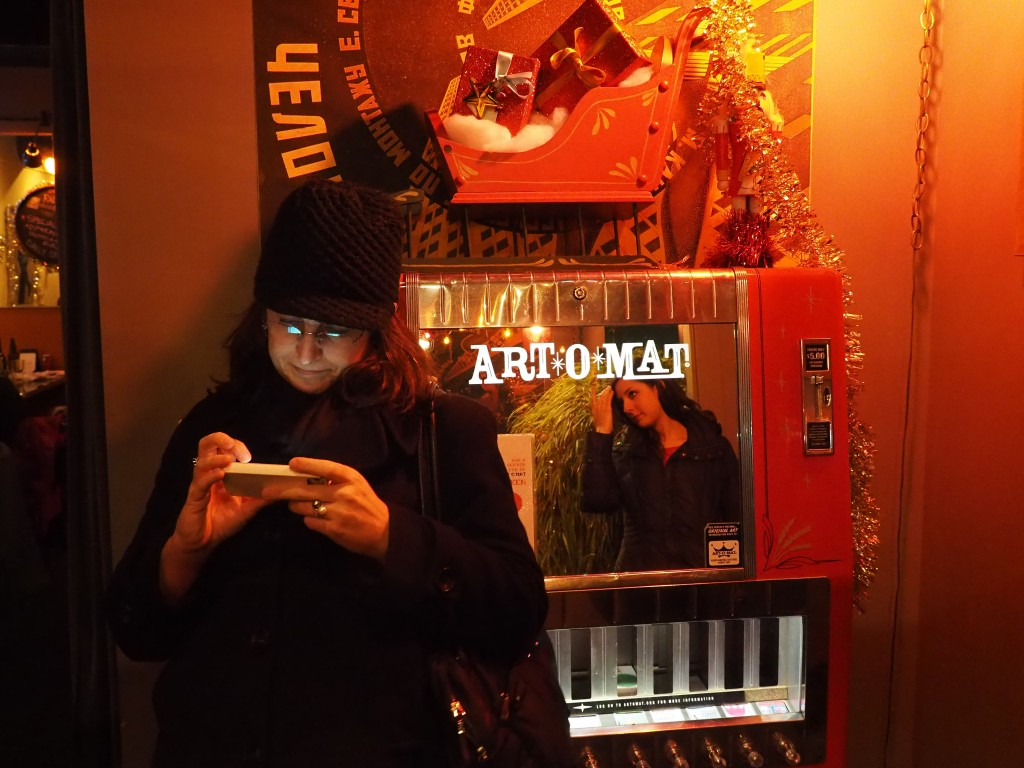 Waiting—so much a part of city life—today shows the reflective light of 21st century technology, blended with reflections on the mirror facing of a 20th century machine. 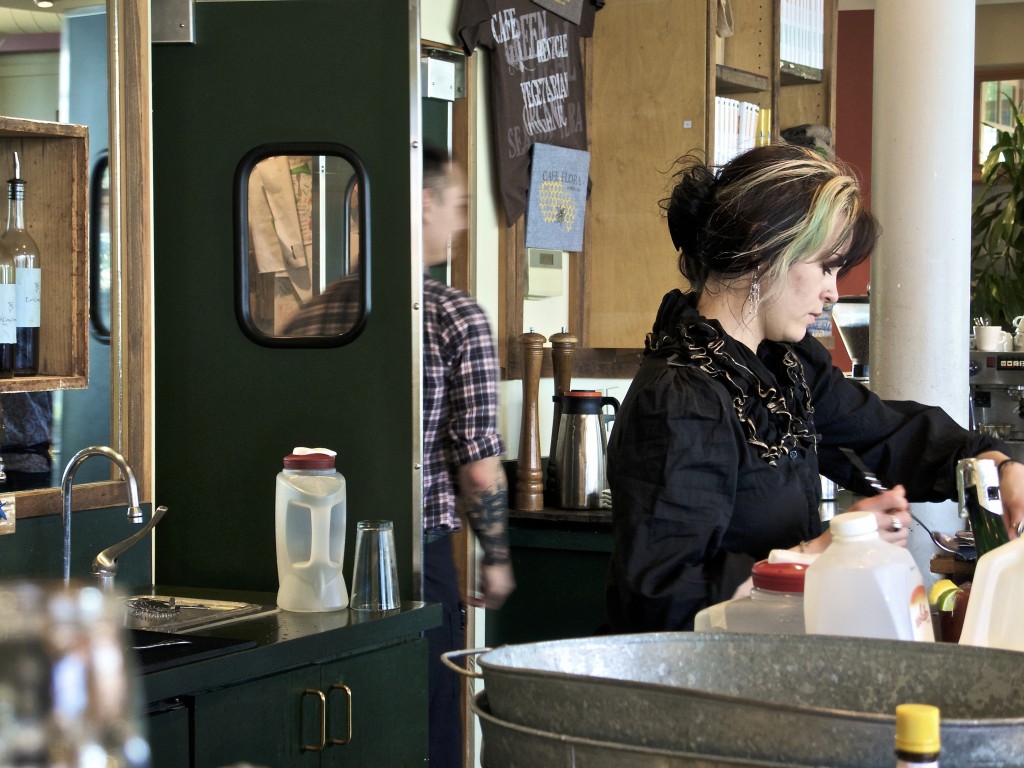 “Hardscape” and nature juxtapose in more ways than the trees and sidewalks of the fifth example above. Here, the hard surfaces of food and coffee preparation contrast with the human scale interaction and features of the scenario participants. It’s a concluding reminder of of who we really are.